Christian Kerez delivers the first set of new designs and digital images of the new Museum's building. The work has been carried on in collaboration with the local practice APA Kuryłowicz & Associates.

The display of models, plans and renderings at the Museum’s temporary HQ is set to attract the wide public interested in the Museum building, the construction of which will be first step towards the regeneration of the center of Warsaw. Viewers will be able to see first-hand the process of the designing work and how the initial competition concept changes into a full-fledged project. The show is an answer to a great public demand and a unique opportunity to look into the backstage of architectural practice.

New solutions, proposed by Christian Kerez, are a result of several months of consultations with the Museum authorities, as well as Polish architects and artists. Varsovians were also included in that process – through public meetings with the architect. Meanwhile, the ultimate functional program of the building has been worked out.

Describing the concept of the building, three following notions need to be mentioned:

The building as a landscape

Experiencing the architecture of the building will give impressions similar to the experience of a natural landscape. It will happen due to the horizontality of the building, its ample spaces and monumentality. The uniqueness of the internal space will lead to a unique experience. Various functions of the Museum have been integrated to a maximum degree. The public will be completely free to choose its own paths through the building, each time experiencing an individually defined space. A walk through the Museum will become an adventure since the building, due to its sheer dimensions and openness towards the city, will offer a wide array of views and perspectives, both internal and external.

The next notion, crucial for the building’s concept is the reversal of the tension between the interior and exterior. In the last 20 years the world’s museum architecture has been focused on delivering spectacular packaging to quite conventional set of white cube galleries, hidden inside. The Warsaw building is, however, concentrated on delivering a unique interior. The elegant, horizontal volume, reflecting the modernist surroundings of the Palace of Culture and Science, is in fact an outcome of the adopted internal structure.

Museum on the dynamic map of the city

The third notion is the reflection of the dynamic urban surrounding in the spatial organization of the building and its architecture. The present design of the facade, revealing a more dynamic expression, and the compacting of the functional program result in a structure of the building which is more integrated with the ever-changing center of Warsaw. The contrasting two levels of the building – its ground floor defined by a grid of pillars, divided by walls, and the upper floor being essentially a wide open space covered by a canopy of the roof – are both integrated by a wide amphitheatre-like staircase. The glass-walled ground floor, offering easy accessibility from the street level and an expanse of windows on the upper level both allow varied views onto the urban life outside. Meanwhile, the monumental spaces for art, creative projects and innovative educational activities, housed indoors, will offer an optimal public space, stimulating creativity and imagination, and inviting to social interaction.

A review of spatial organization

The project of the building is gradually evolving towards the full integration of exhibition and multi-function spaces. The art will be visible – and reachable – from the street level at the gallery space in the east wing of the building. That exhibition hall will host a program aimed at the wide public – “big names” in both Polish and international art will be shown here.

The spaces on the ground floor will offer a varied program – both the large auditorium and the cinema hall will be located here, together with a large bookshop, restaurant overlooking the southern, central plaza, and an additional exhibition space, called “The Warsaw Gallery” – aimed at the local artistic milieu, interesting debuts as well interdisciplinary projects, reaching outside the visual arts framework.

The main lobby of the Museum will be opened towards both Marszalkowska street and the future central plaza, and it will also connect to the upper floor of the Museum. Wide, amphitheatre-like stairs will lead visitors up, where a roomy reception lobby bisects the whole floor, dividing the vast east exhibition hall from the western set of galleries.

The exhibition room, reaching 16 meters in height, will give a cathedral-like experience and will host large-scale sculptural and site specific projects.

The western wing will house the core of the Museum, i.e. its permanent collection halls, followed by rooms for historical exhibitions of Polish and international art of the 20th and 21st centuries.

Additional space will host research projects, aimed at exploration of artistic archives and documentation, such as the inaugural exhibition “As soon as I open my eyes, I see a film. Experiment in the art of Yugoslavia in the 60’s and 70’s.” held at Museum temporary HQ.

Behind that set of galleries the museum library and reading rooms will be located, connected to the ground floor through independent staircases and entrance from the street level.

The integration of the functional program on two floors, visitor-friendly layout of exhibition, educational and leisure areas, as well as the architectonic concept of the roof which combines both the construction and facade of the building – all those steps lead towards a maximum of coherence and unity of the project. 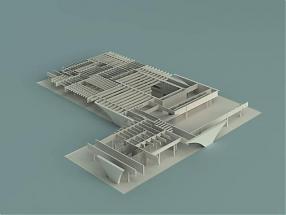 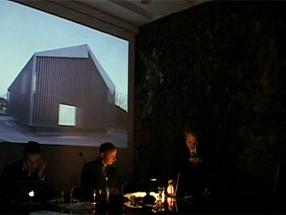