A Beast, a god, and a line
Art, religion, and woven knowledge in today's Asia / Pacific

"A Beast, a God, and a Line" is an invitation to take a look at contemporary history from the perspective of Asia and the Pacific in this moment of global uncertainty and a crumbling of the western order that dominated for centuries. The show’s artists pose courageous questions and thoughtfully explore the new, fragmented reality of our world today.

Attention: the artwork of Ming Wong "Bloody Marys - Song of the South Seas" (2018) (instalation, one channel video) might potentially trigger seizures for people with photosensitive epilepsy.

Curated by Cosmin Costinas, director of Para Site contemporary art centre in Hong Kong, the exhibition welds a narrative of Asia and the Pacific as a universum of intense, diversified relations that made up a thick cultural fabric long before the region was subjugated by colonial hegemony. The show of over 50 artists from across the region, including Cambodia, India, Vietnam, Madagascar, Bangladesh, Philippines, and Australia sets a foundation for the possibility for taking a deeper glimpse into this complex region of the world in both its political and artistic sense.

The show’s narrative is focused on the multilateral flow and exchange of ideas, resources, and forms throughout the region of Asia and the Pacific. Realities that have defined this expansive, culturally and religiously diverse region united by two bodies of water, the Pacific and Indian Oceans, for hundreds of years are now part of a global conversation: mobility, blurred boundaries, transfers of knowledge and information, migration of scientific, artistic, and economic ideas, along with traditions and quotidian creative practices. Ships sailing to Madagascar and the eastern shores of Africa as well as to the Philippines and the Pacific Islands transported ideas, technologies, and techniques for creating art.

The show’s curator reached out for traces of these many influences, some of them ancient, while its whole was narrowed down using a handful of key issues that set up the focus for these works: textiles, sea trade, local knowledge, and exploitation of natural resources.

The narrative plays out on a series of levels, tracing the evolution of flow and exchange through different periods and eras – from Austronesian sea migrations that scattered speakers of this family of languages throughout the globe, including today’s Taiwan, Singapore, Indonesia, Malaysia, Madagascar, and Polynesia through the devastating period of European colonialism and the unstable events of the present.

For the European spectator, the more subtle aspects of these histories of nuances and contexts may not be obvious. The show builds up a story about a region that is going through a constant process of redefinition, shifting the map and ideologies imposed by colonial powers, some of which have been ingrained into local cultures. The Euro-Atlantic region is generally concentrated on reliving its flailing influence within the world order, while A beast, a god, and a line depicts broader South and South-East Asia as regions that are experiencing an emancipatory awakening. The turn of the millennium brought on a drop in confidence for the ideals of western liberal democracy, the driving force for globalisation in previous decades. Across Asia, alternatives and challenges to the liberal consensus are being imagined, often based on various attempts to create parallel narratives to Western modernity.

Many pieces in the show refer to various historical, cultural, and geographical contexts. They make use of different media, languages, and resources. Many of them have reinvented new meanings for certain materials, objects, and forms, while reconsidering their legacies and how they can express them in a contemporary context. Others have focused on an analytical approach to creative work, examining history and politics through extensive research projects. Most of these works are united in their use of textiles, their historical role and significance, as well as their journey of “migration”. Textiles are a common material and language for many cultural spaces, and they are strongly connected to different histories of art. Revealing the relationship between textiles and different contexts, as well as their political, religious, and economic contexts, the show’s artists reveal the unique position that textiles hold in the realm of art.

Among the show’s artists, Malala Andrialavidrazana (Madagascar/France), creates images based on colonial era maps and banknotes from around the world in the past decades, in order to change our perception about the world. Joël Andrianomearisoa (Madagascar/France) works with fragments of textiles to create a triptych that appear at first glance to be minimalist tapestries but the origin of the fragments composing them tell the complex story of connections between Madagascar and India. Hong Kong-based artist Christy Chow filters the idea of fabric through the idiom of today’s global economy. Her installation relates to social injustice and global exploitation being based on a factory-produced t-shirt, which was originally machine sewn in 15 minutes. The artist manually takes apart all its 4,000 stitches, counting each one of them out loud. She pays tribute to the nameless factory workers, living in a world away from the traditions of textile making prior to the age of mass production. Gauri Gill (India) has been involved with marginalised indigenous communities in many of her works. For the piece shown in the exhibition, she collaborates with Rajesh Vangad, an indigenous artist who works in the Warli tradition of drawing. While Gauri Gill observes the community as an outsider through the medium of photography, the relationship of power is destabilized by Rajesh Vangad’s response as a drawing on top of her image. Simryn Gill (Malaysia) creates a series of prints using collected pieces of wood, washed up from the sea. Degraded by exposure to the sea and sun, they bear traces of their journey. Gill presses these pieces onto a collection of papers, including accounting slips, and reference books, capturing the drift of these pieces as well as tracing the rise and fall of markets, and human movements.

One of the key points illustrated in the show is how religion has been politicised in the region, as well as in most of the world. This religious radicalisation has increased over recent years, and can be seen in Buddhism and Hinduism (which are typically and wrongly associated in the West with mostly peaceful practices), as well as in Salafi Islam and Christian extremism.

One of the subjects of the exhibition is Islamophobia, and the manifestations of this phenomenon in this region, home to a majority of the world’s Muslim population. The most apparent example of these tensions today is the persecution against the Rohingyas in Myanmar.

Throughout the exhibition artists investigate traces of colonial domination, as well as the different ramifications of that hegemony today, when cultural and environmental genocides continue to unravel landscapes, communities, and worlds, particularly among the most marginalised indigenous groups. 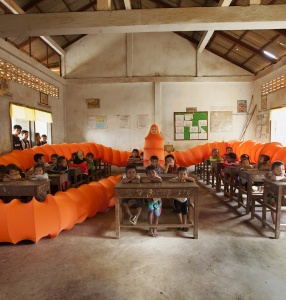