The Museum of Modern Art in Warsaw invites you to the 9th edition of the Bródno Sculpture Park.

The 9th edition of the Bródno Sculpture Park is a “repeat” of museum materials. We review the 8 previous editions of the exhibition, revisiting our dear old friends: artists, works, realized and unrealized concepts. This year’s edition also includes preparations and cleanup before the jubilee 10th edition of the project.

The program for the 9th chapter of the Bródno Sculpture Park launches on 24 May and lasts until 30 September 2017, when the cast of the work Mieszczenie z Bródna (Location from Bródno), executed at the Polish Sculpture Centre in Orońsko, will be installed. The design for the sculpture was worked on last year by various groups of Bródno residents: athletes, local officials, parishioners, artists, refugees….

This year’s program includes initiatives helping stakeholders get to know one another better—museum staff, local audiences, tourists, recreational users of Park Bródnowski—and critical reflection on the functioning of the sculpture park here on the east side of the Vistula. This will include hikes from the Museum on the Vistula (in the Powiśle district) to the Bródno Sculpture Park, inspired by Situationist dérives (“drifts”); social consultations in the form of picnics; a flying university of art landing at community centres, libraries, prisons; and visits by artists who realized their works in previous editions (such as Monika Sosnowska, Katarzyny Przezwańska and Paweł Althamer).

A “re-enactment” group will also function at the park, recreating works of art from the 20th and 21st centuries instead of historical battles. This is art history in practice, drawing for example from the artistic resources of the “instructions” from the Museum of Arte Útil compiled by the Cuban artist Tania Bruguera.

Another feature of the program will be conservation and research on the works collected in the park. A new site for the Bródno Sculpture Park will be launched soon, gathering together texts, maps, photographic documentation, audio descriptions and educational materials about all of the previous editions of this exhibition of contemporary art as it has grown from each year to the next.

The Bródno Sculpture Park was launched in 2009 as a joint initiative of the artist Paweł Althamer, the Targówek District, and the Museum of Modern Art in Warsaw. The park functions as an evolving exhibition of contemporary art, presented outdoors and accessible to visitors 24 hours a day. 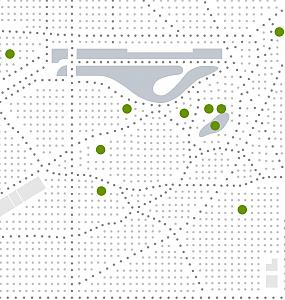