The Museum of Modern Art in Warsaw would like to invite you to three premiere performances inspired by physical culture and body sculpture at the Bródno Sculpture Park.

Post-internet artists: Marta Ziółek and participants of the 9th Berlin Biennale currently taking place: Helga Wretman and Nik Kosmas, will present works related to “making yourself” in the era of social media, completing the “Burghers of Bródno” self-portrait which is the main theme of the project's 8th edition.

Wall bars are one of the most basic and universal strength and stretching exercise equipment. Nik Kosmas is fascinated by their open form and multi-functionality - not only can they be used for an endless number of different exercises, but also for drying towels, installing a shelf system or playing erotic games. During the 9th Berlin Biennale he created a whole system of wall bars where a training session led by the artist and his friends (including Helga Wretman) was held once a week. For the Bródno Sculpture Park he designed a new piece of exercise equipment, which will be used for a demonstration workout during the opening. “My goal is to create an exercise platform for energetic people that would encourage them to find their own training methods and change their lifestyle. Wall bars are a structure that can be used spontaneously” - the artist said about his Bródno project.

Marta Ziółek’s new performance was inspired by iconic photographs from sea resorts from British photographer Martin Parr's series called „The Last Resort” and „Life’s a beach”. Parr sees tourist destinations as modern day garbage dumps and shows tourists’ bodies in their both trivial and surprising surroundings. “4 sculptures, pop and sparkling water” is a movable installation consisting of sculptures of performers’ bodies melted with objects that serve as prostheses. Their costumes, covered with crystals, were inspired by a trivial object belonging to Ziółek - a plastic, pseudo-luxurious iPhone case. The work mixes tackiness with street glitz and beach workout with 52 blocks fighting.

The author of the famous “Fitness for Artists” video series will invite Warsaw's outdoor exercise enthusiasts to take part in her performance. The artist became interested in the phenomenon of group photography, for instance of football teams, which aids in formulating and consolidating a group's identity. On the one hand, Wretman focuses our attention on the primal need of the individual to identify with their “own group”, as opposed to a “foreign group”, while on the other, she underlines the growing need to belong and express yourself in the contemporary world. Participants of the performance will execute a fitness choreography that refers to the activity of posing for a group photo, which will be recorded in the end using a drone. 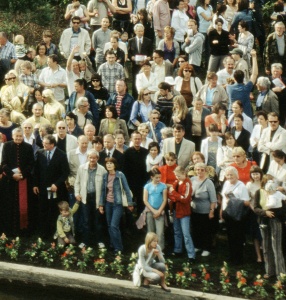