How a Peasant Tricked a Devil. Notes for New Cosmogonies
Lecture by Valentinas Klimašauskas

Museum of Modern Art in Warsaw invites you to the lecture by Valentinas Klimašauskas entitled "How a Peasant Tricked a Devil. Notes for New Cosmogonies".

Extraordinary times require extraordinary figures of speech. Ancient cosmogonic mythologies and their protagonists may help us to understand why today’s positivist myths of egalitarian nationalist societies do not function as we wish.

Looking for a mythical figure that would embody the current global state of the intertwined capital scene, global warming, sixth great extinction, and “post-truth” politics, one may easily stumble upon the chthonic figure of velnias, Lithuanian for ‘devil’. As god is dead, and so is the Goddess, sorry, Marija Gimbutas, velnias seems to be alive and kicking.

The pre-Christian version of chthonic velnias was a deity: the opposite of the sky gods, someone taking care of the dead and animals at a time when the afterlife was imagined as a meadow and the dead would become animals. Velnias has a connection to lakes, swamps, bogs, wetlands and water in general, farmed earth, forests, forest animals, priests, musicians, all playing an important part in erotic imaginary, etc. One of the richest figures in terms of the variety of its appearances in folklore, velnias also was the wealthiest deity, as velnias knew where the underground wealth was hidden, often corrupting priests and farmers alike.

In the context of the exhibition “The Dark Arts: Aleksandra Waliszewska & Symbolism of the East and the North” Klimašauskas will talk about the symbolist paintings of Antanas Žmuidzinavičius, Mikalojus Konstantinas Čiurlionis, and moving image of contemporary artists Ieva Kotryna Ski, Anastasia Sosunova and others while drawing a connection between the old mythology of chthonic velnias and the new mythology of post-democratic capitalism with the so-called financial heavens, fossil capitalism, post-fact politics, and will concentrate on the chthonic powers of the capital itself.

Valentinas Klimašauskas is a curator and writer. Together with João Laia he curated “The Endless Frontier”, the 14th Baltic Triennial at CAC Vilnius (2021). With Inga Lāce he curated “Saules Suns”, a solo exhibition by Daiga Grantina for the Latvian Pavilion at the Venice Biennale (2019), worked as a Program Director at Kim? Contemporary Art Centre, Riga (2017/18), and was a curator at CAC, Vilnius (2003-13). Currently, he is the curator at large at Springs.video, a moving image streaming platform that also serves as an educational and curatorial archive and curates an exhibition program at Nemuno 7, Zapyškis.

Other recently curated projects include “An Incomplete & Unreliable Guide to Social Media War Room” at Georg Kargl Gallery, Vienna (2021); “Máscaras (Masks” at Galeria Municipal do Porto (with João Laia); “The Cave & the Garden” at Futura CCA, Prague (2020); “Columnists” at Editorial, Vilnius (2019); “Somewhere in between. Contemporary art scenes” in Europe at BOZAR, Brussels (2018); “Portals or location scouting in Kaunas”, presented by Spike Art Quarterly (2017); “A hat trick or a theory of the plankton”, Podium, Oslo and Sodų 4, Vilnius (2016); “a cab”, Kunsthalle Athena, Athens, and Podium, Oslo (2015). 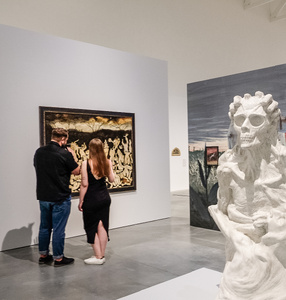