The action of Zbigniew Warpechowski (…) referred to a limited, illusive space of freedom and artistic autonomy in Poland of the 1970-s. The artist, put in the corner of the gallery hall, tried to annex the biggest possible area of the wall, making a coal drawing with circular movements of the arms.

The placing of the artist (in the corner of the room) seemed to characterize a margin social position of the artist in Poland of the 1970-s. Uncomfortable position of „creation”, as well as the drawing, the edges of which were marked not by the borders of the page, but by limitation of body movements, physical effort of annexation, could be interpreted as a metaphor of strategy of resistance of the case, defined by the „policy of excluded areas”, as noticed by Waldemar Baraniewski. It defined the whole decade of the 1960-s, promoting a model of moderately comfortable living and functioning in an autocratic state at a price of leaving the longing for transgression. Warpechowski, squeezed in the gallery corner, has seemed to point out the limitation and insignificance of an Avant-guard artist within the glass wall, and highlight the artist’s freedom at the same time; the action critically referred to the illusion of artistic actions autonomy in an autocratic state, at the same time, defining the strategy of resistance as a situation of constant threat to the gallery/artistic field by a subject, smutting white walls with coal / marking his presence within the discourse.

[L. Nader, Conceptualism in the Peoples Republic of Poland, Publishing House of the Warsaw University, Warsaw 2009.] 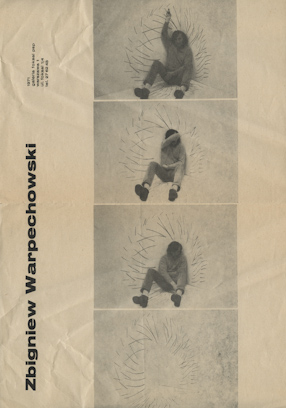