One of Józef Robakowski’s most important artistic propositions in the 1970s were “Biological-Mechanical Records”. They were connected with a transgression of the category of authorship – the artist and their work. In this piece, Robakowski chose to transfer the authorship to a machine (film camera). Based on the analysis of relations between the mechanical media and the organism of the cinematographer, “Biological-Mechanical Records” were created by enacting a particular kind of scores. In Exercises for Two Hands (1976), by “detaching the camera from the eye” (holding two active cameras in his hands and waving them around), the artist wanted to avoid subordinating the film to the decisions of the cinematographer and eliminate the influence of human habits, intentions and imagination on its form. Building on “the creativity of the machine”, he attempted to go beyond the anthropocentric limitations related to the properties of traditionally understood creative subject. The artist wrote: “The devices I use to make mechanical records ... owing to their specific character and potential allow me to go beyond my visions of phenomena concealed in the complex ‘reality’. ... They help me to reveal more than I know, see and feel.” (Józef Robakowski, “Biological-Mechanical Records”, in Ryszard Kluszczyński, Workshop of the Film Form, p. 80). Yet, “Biological-Mechanical Records” do not entail passive subordination to the machine. Since their character is determined by a transfer of psycho-physical states of the cinematographer onto the film stock, they can also be interpreted as a “struggle” with machines waged in order to saturate them with the artistic subjectivity of the author and human conditions. Therefore, analysed in “Biological-Mechanical Records”, the confrontation between the human being and the machine occupies the territory between the “interiorisation” of its logic and attempts to “anthropomorphise” it. The cycle of “Biological-Mechanical Records” also comprises such films as Along the Line (1977), in which the artist continuously films a line on the ground as he runs, jumps, walks and rides. 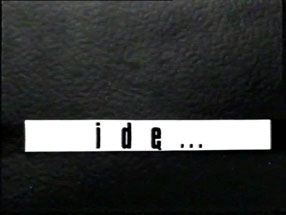 The Dungeons of Manhattan, 1989