I wanted to treat the city as a sheet of paper that I can crumple or draw on; where I can draw a line. Akin to an urban planner or a draughtsman who is about to begin to sketch a city. (...) Since Łódź lost its status of an industrial centre, air lingers there all the time in a certain sense. The space required ventilating, but to make it happen I needed something that would set the still air, the surrounding buildings and their dwellers in motion. Even though it is by nature a transparent but audible and tangible mix of chemical substances in the atmosphere, the air in Łódź appeared to me as a mass of slime that sets the movements in slow motion and kills all dynamics. (...) Making any kind of movement in such circumstances requires a certain force, often rapid, that would enter such space. That was what I needed... Superior to the city, sound and vision fulfilled that condition.

In 2013, a jet airplane flew lower than 200 metres above Piotrkowska St. in Łódź, the city’s oldest thoroughfare and the starting point of Łódź’s linear urban growth. When the plane disappeared, another one emerged that left an ephemeral smoke line suspended in the air – the new first line in an urban planner’s sketchbook. 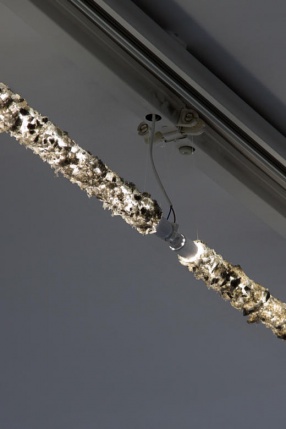