Mladen Stilinović. I Have No Time
Artist's Books

Museum of Modern Art in Warsaw presents the first Polish exhibition of artist's books by Mladen Stilinović, one of the leading Croatian artists.

In his extensive oeuvre and through various media, Stilinović mirrors and questions the ideological signs that condition a society. Since the beginnings in his art he exposed the symbols that were the strongest expressions of ideology at the time. In agreement with the Russian philosopher Mikhail Bakhtin's statement that "Language is the ideological sign par excellence," the artist's interest in language remains at the center of his activities. His early works in poetry and film led to an interest in artist books, which the artist still produces in small handmade editions using simple materials such as photographs, newspaper clippings, and writings in crayon or pencil. The books have been shown previously at the exhibition „Subtraction of Zeroes“ at Platform Garanti in Istanbul in 2008, at Van Abbemuseum in Eindhoven, at Gallery Nova in Zagreb, at Index Gallery in Stochkolm and by e flux at the Copper Union in New York. Mladen Stilinović was born in 1947 in Belgrade and lives in Zagreb. From 1969–76 he worked with experimental film. He was a member of the Group of Six Artists (1975–79) and also ran the PM Gallery in Zagreb from 1982–91. His works include collages, photographs, artist books, paintings, installations, actions, films, and video. Stilinović has exhibited in numerous solo and group shows worldwide since 1975, as Venice Bieniale 2003, Documenta, 12, 2007. In Poland he particpated, among others, in the group show in 2008 "Kiedy rano otwieram oczy, widze film/As soon as I open my eyes, I see film. Experiments in Yugoslavian art in 60's and 70's", which was the first exhibition organized by the Museum of Modern Art in Warsaw 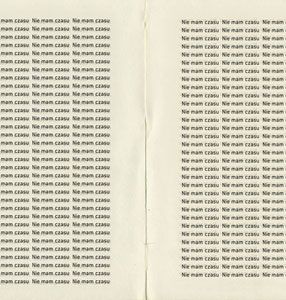